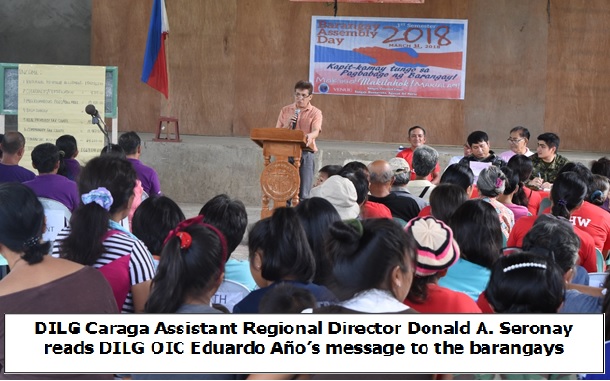 Still, Barangay Sangay in Buenavista, Agusan del Norte, the showcase barangay of Caraga region successfully held the assembly with a 458-strong number of attendees. In line with the theme, “Kapit-kamay tungo sa Pagbabago ng Barangay! Makiisa! Makilahok! Makialam!”, Punong Barangay Mateo B. Mapute, Sr. delivered the State of Barangay Address (SOBA) highlighting the accomplishments of the barangay in governance. The Barangay Treasurer gave a comprehensive financial report while a representative of the Barangay Council presented on updates of 2018 programs and projects of the barangay.

One of the highlights of the assembly was the reading of Secretary of the Interior and Local Government (SILG) - Officer-in-charge Eduardo Año by DILG Caraga Assistant Regional Director (ARD) Donald A. Seronay wherein he stressed that the barangay has a big contribution to the country. The message also enjoined all community members to be active partners in the fight against drugs and corruption and called on barangay officials to be “matino, mahusay, at maaasahan.” 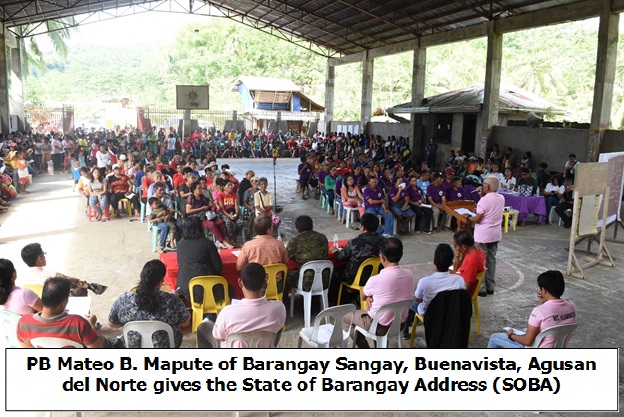