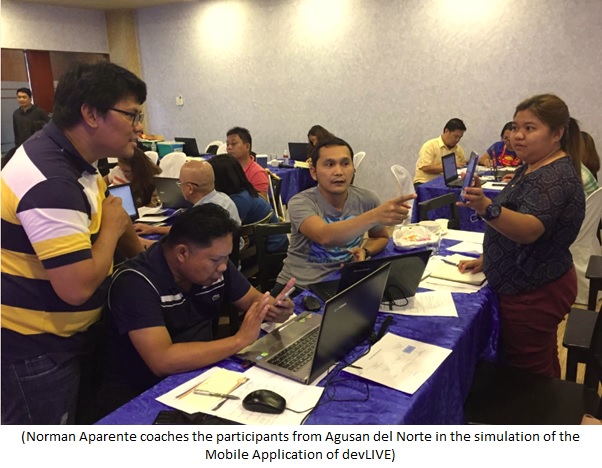 It was also attended by the department’s regional and provincial project development and management unit representatives. Norman Aparente of the Support to Local Government Program-Project Monitoring Office (SLGP-PMO served as the resource speaker. He was joined by devLIVE developers, Fernan Marco Tipones, Ma. Andrea Irish Parpan and Lara Fameronag who served as facilitators during the simulation of devLIVE. The activity was held at the Grand Palace Hotel, Butuan City.

Assistant Regional Director Engr. Donald A. Seronay expressed in his welcome message that “Development Live will really entice [people] participation in ensuring a real time update of our projects....this is also aimed to helping the [LGU’s] Project Monitoring Committee to be fully functional.”

DevLIVE is a reporting platform developed by the SLGP-PMO in partnership with the United Nations Development Programme Philippines (UNDP). It aims for greater transparency, accountability, efficiency in the implementation of government infrastructure projects in partnership with the citizens. Also, this is a support to the commitment to the General Appropriations Act (GAA) for the direct reporting of LGUs to both chambers of Congress; and a support to the commitment with the Open Government Partnership.

DevLIVE has two reporting platforms. First, is the “web-based” for LGU online reporting where the registered local government users input updates of the progress of project implementation for the LGSF-Assistance to Municipalities (other DILG Programs will be included for monitoring in future development of devLIVE). Entries made by the local government users will be validated by the Municipal Local Government Operations Officers (MLGOOs) for correctness of data before it will be posted in the website and reflected in the mobile application.

The second reporting platform of devLIVE is the “mobile application” (available to android smartphones for now, but soon to be developed for iOS). The mobile app is a user friendly app designed for real time citizen feedbacking on all “on-going and completed” LGSF-Assistance to Municipalities projects. It encourages beneficiaries to express their satisfaction in a survey-type interface built-in with an option to upload actual photos of projects. Each feedback submitted in the mobile app shall be emailed to the concerned registered local government users, MLGOOs, and DILG provincial and regional office for review and validation.