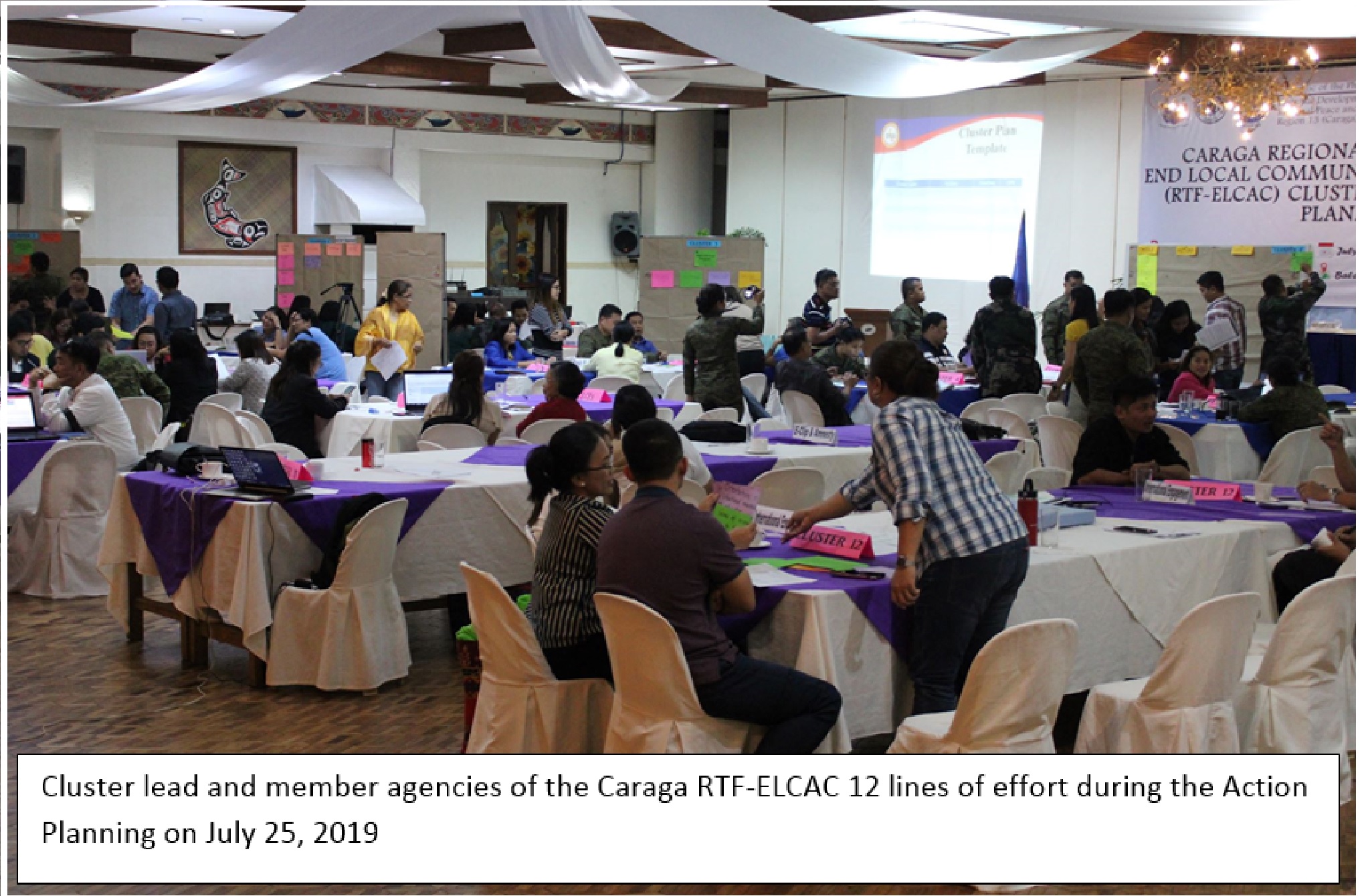 The activity was seen necessary to ensure that all 12 clusters for the 12 line of efforts to efficiently converge in implementing the Whole-of-Nation Approach (WNA), after the Regional Development Council (RDC) and the Regional Peace and Order Council (RPOC) officially adopted the said RTF through the Joint Caraga RDC-RPOC Resolution No. 1, S. 2019 during the Joint Full Councils Meeting held on June 26, 2019 in Balanghai Hotel and Convention Center.

Director Lilibeth Famacion of DILG, in her opening message, recalled that Cabinet Secretary KARLOS ALEXEI NOGRALES who is also the Cabinet Officer for Regional Development and Security (CORDS) for Caraga, has mentioned the necessity for each cluster to conduct organizational meeting. Director Famacion also said that “While several orientations and activities on Executive Order No. 70 have already been conducted, we still take cognizance of the challenges and difficulties in operationalizing the whole of government approach at the local level.”

The activity was paved for the 12 Clusters to meet, organize and discuss relevant reports or cluster update and prepare Cluster Action Plan to operationalize the respective tasks, as articulated in the NTF-ELCAC National Implementation Plan 2019-2022. It was also an avenue to popularize the WNA concept as a strategy to end local communist armed conflict to as many stakeholders and partners for better appreciation and understanding, such that the whole of government, the private sectors, civil society organizations and other relevant institutions and groups are organized for peace and development.

Director Manuel Orduña of the National Intelligence Coordinating Agency (NICA) R-X and his staff, Ms. Erika Jeana Cariño, provided input regarding the EO 70. The task of discussing the implementation plan of each cluster were left to the lead agency/ies during the Breakout Session for Planning, which was assisted/facilitated by both NEDA and DILG personnel. Director Famacion also mentioned that the DILG has already drafted the guidelines for the localization of EO 70, wherein the creation of the Provincial Task Force for ELCAC and the Retooled Community Support Program (RCSP) Teams for the City and Municipal level are among the significant provisions.

Putting emphasis on RD Famacion’s message, she’s saying that Caraga region has still a lot of things to work on, yet we should not discount the efforts we’ve been putting for peace and development, as we put premium on the integration of peace-building processes through our Peace and Development Zone (PDZ) initiatives, quoting Eleanor Roosevelt that “It isn’t enough to talk about peace, One must believe in it and it isn’t enough to believe in it, One must work at it.”

In conclusion, the clusters orientation and planning raised the expectation for clusters to work in harmony for the achievement of their tasks.