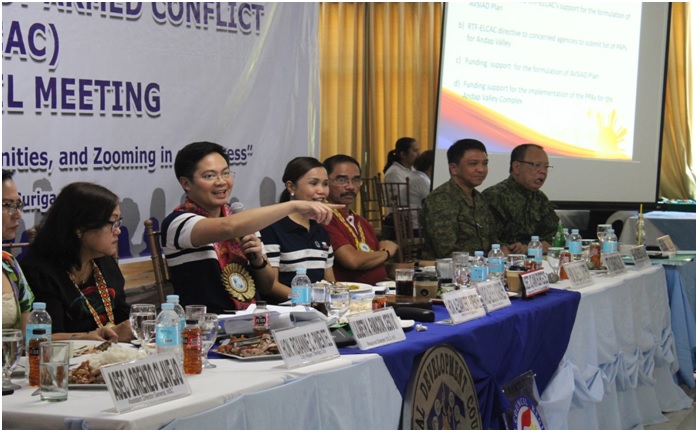 To further strengthen the efforts of the region in implementing Executive Order No. 70, s. 2018, members of the Caraga Regional Task Force to End Local Communist Armed Conflict (RTF-ELCAC) convened for its 3rd Full Council Meeting at Villa Maria Luisa Hotel, Tandag City on October 23, 2019. Cabinet Secretary Karlo A. B. Nograles presided the meeting as the appointed Cabinet Officer for Regional Development and Security (CORDS) and Caraga RTF-ELCAC Chairperson. CabSecNograles emphasized that Caraga, as a top performing region in implementing E.O. 70, has already accomplished a lot. Thus, in order for the region to continue this success, he encouraged the members of the task force to give their full support and cooperation.

One of the most pressing issues discussed was the presence of non DepEd-registered educational institutions, namely Alternative Learning Center for Agricultural and Livelihood Development, Inc. (ALCADEV) and Tribal Filipino Program of Surigao del Sur (TRIFPSS), in the province of Surigao del Sur. DepEd Regional Director Francis Cesar Bringas presented some salient facts about these schools; e.g. school curriculum, number of teachers and students per school, photos of school facilities and the geographical profile of schools vis-à-vis nearby DepEd schools. The Director also reported on the successful establishment of several DepEd schools in areas where the ALCADEV and TRIFPSS schools were operating. To strengthen this effort, members of the task force gave their full support on DepEd’s Last Mile Schools Program and agreed to create a Technical Working Group (TWG) solely for the closure of the said illegal schools.

NEDA Regional Director Bonifacio G. Uy also presented the Status of the Formulation of the Andap Valley Sustainable and Integrated Development (AVSIAD) Plan and the initial list of proposed PPAs for the area. According to the Director, Andap Valley is located in the central part of Surigao del Sur encompassing seven municipalities. Large portion of the area has been utilized as training ground for physical and weapon practices and as breeding ground for full-time NPA members.

“Andap Valley is one of the identified areas in the region with heavy influence of Communist and Terrorist Groups (CTGs) and where most of the ALCADEV and TRIFPSS schools are located,” said RD Uy. The Director further discussed some of the efforts done by the region to implement the formulation of the AVSIAD plan.

Moreover, RD Uy also reported the hunger and malnutrition situation in San Luis, Agusan del Sur as well as the rest of the 12 municipalities in the same province having high poverty incidence. According to the Director, the 2018 Local Poverty Intensity Index conducted by the Province of Agusan del Sur revealed that the municipalities of La Paz, Loreto, Trento, Talacogon, and San Luis are among the top five in terms of local poverty intensity index. Thus, to provide support to these municipalities, CabSecNograles requested the Poverty and Reduction Livelihood and Employment Cluster (PRLEC) led by TESDA to take a look at possible interventions for the top 5 poorest municipalities in Agusan del Sur.

In addition, the proposed logo of the Caraga RTF-ELCAC was presented by DILG Regional Director Lilibeth A. Famacion and was subsequently adopted by the body as the official logo of the task force.

Lastly, the meeting ended with the body agreeing to hold its 4th meeting in the province of Agusan del Sur on December 2019.