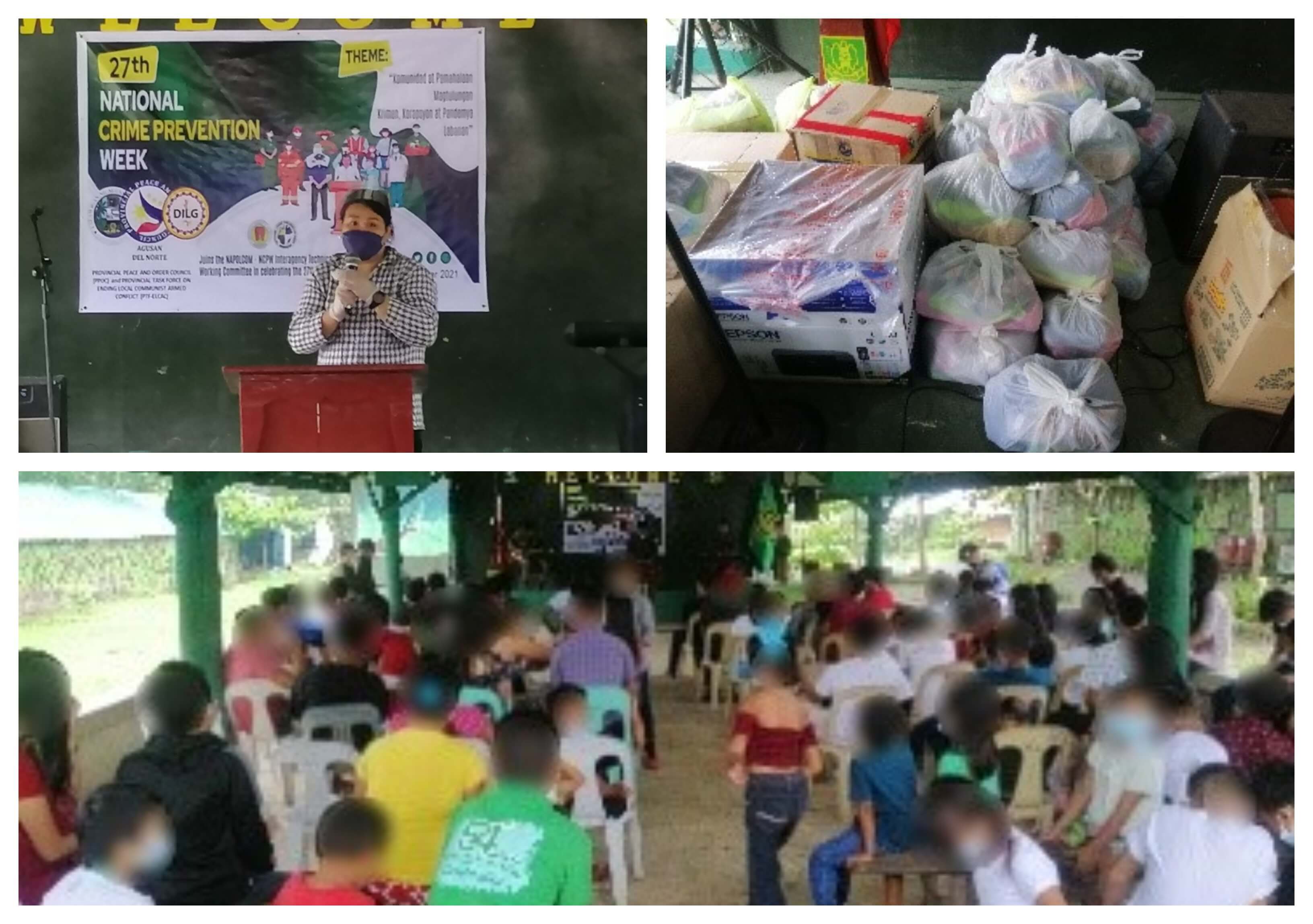 The Department of the Interior and Local Government (DILG) Agusan del Norte continues the celebration of the National Crime Prevention Week (NCPW) celebration by holding the second leg of its Gift-Giving activities. DILG ADN conducted a series of activities such as gift-giving and visitation to facilities that house Children In Conflict with the Law (CICL), other children victims of abuse, Children In Armed Conflict (CIAC), as well as Former Rebels (FRs).

The NCPW Team visited the FRs housed in the temporary shelters inside the 23rd Infantry “Masigasig” Battalion headquarters in Barangay Alubijid, Buenavista town on September 6, 2021, and the 29TH Infantry “Matatag” Battalion in Barangay Del Pilar, Cabadbaran City camps on September 7, 2021, respectively. The facilities serve as temporary shelters to FRs who are still awaiting their final reintegration into their chosen community. This facility receives periodic logistical support mainly from the Provincial Government of Agusan del Norte, the LGU of Buenavista, as well as some national government agencies (NGAs) and other stakeholders.

The 23RD IB facility currently houses 37 FRs together with their families/dependents, around 111 all in all; while the 29TH IB currently houses 19 FRs, around 41 in total. These FRs undergo several skills and livelihood training, spiritual and moral recovery, and other deradicalization and reformation activities.

DILG ADN Provincial Director Ellen Vee P. Chua expressed great appreciation for the warm welcome from the FRs, stating that the government will always be there to deliver the basic services and interventions necessary for their reintegration and reformation, thus redounding to its essence to holistic crime prevention. 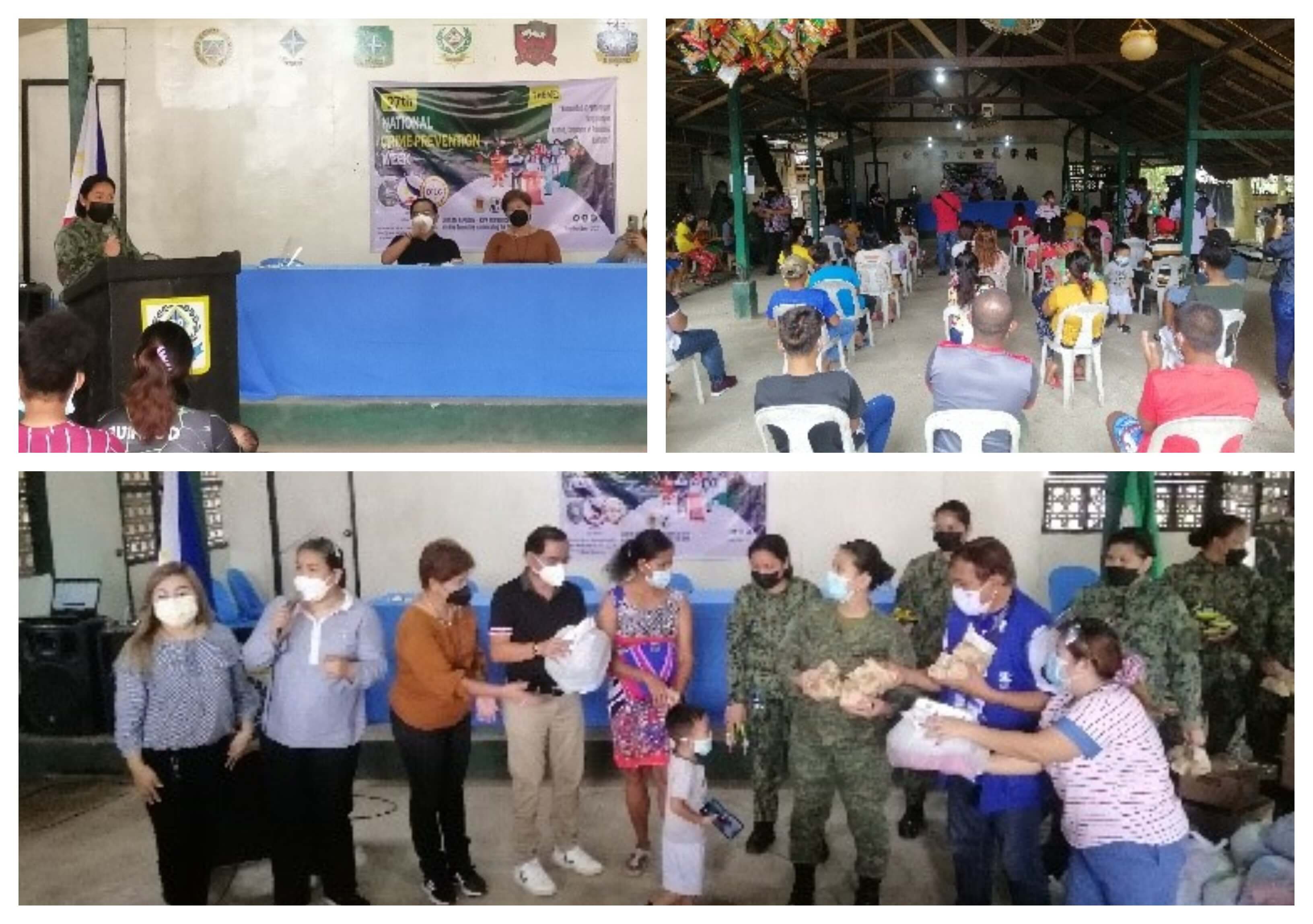 The representatives of the commanding officers from both the 23IB and the 29IB warmly received the guests and FRs in the activity. They expressed a deep sense of gratitude for the continuous support from the provincial government on their periodic subsidy for the FRs as well as for including them in the facilities being visited by the NCPW Team. The guests were treated to a showcase of talents that indicate the FRs’ turnaround in commitment this time to the government, as well as an appreciation for being part of the priority sectors for intervention by the national government and local government units.

Gov. Corvera spoke to the FRs on the essence of their surrender that signifies their disenfranchisement from the revolutionary forces. He stated that the provincial government and the members of the Provincial Task Force on Ending Local Communist Armed Conflict (PTF-ELCAC) through the Provincial Peace and Order Council (PPOC) recognize the importance of the Whole-Of-Nation-Approach in curbing and preventing crime which leads to eventual and sustainable peace at the local level.

Ms. Racho relayed the message of Cong. Amante-Matba that the provincial government is well on its way to eventually attaining that lasting peace. She continued that this is evident in the upsurge of surrendering FRs availing of the government’s reintegration program, which the congresswoman has continuously made one of her top priorities in public service. She likewise assured the FRs and the two battalions that the provincial governor and the congresswoman will stay true to their commitment to serve all vulnerable sectors including the FRs who have returned to the fold of the law.

Major Ometer emphasized that the NCPW celebration also promotes the PNP’s program on BARANGAYanihan (Bayanihan sa Barangay) Help and Food Bank, which exemplifies the true Filipino spirit of naturally looking after each other in times of disasters as well as achieving a goal that would collectively benefit them. She likewise delivered PD Gamba’s message of goodwill and hopes of strengthened cooperation between the government and the public in preventing crimes and allaying the effects of disasters.

The DILG NCPW Team is set to conduct the next series of activities in the coming days in other priority facilities throughout the city and the province.